Buses play a key role in in our nation’s transportation system, carrying millions of children daily to and from school and moving millions of Americans each day around our cities. Buses reduce the number of individual cars on our roads, make our communities more livable and sustainable, and provide transportation options for people of all ages and abilities.

Yet, the majority of America’s buses remain dirty – burning fossil fuels like diesel that put the health of our children and communities at risk and contribute to global warming:

Numerous studies have shown that inhaling diesel exhaust can cause respiratory diseases and worsen existing conditions like asthma. The negative effects are especially pronounced in children.

Diesel exhaust from buses poses a particular risk to health. Buses primarily travel where there are lots of people, including in the more densely-crowded areas of cities, on the busiest roads, and near schools. They also circulate continuously and make many trips, and therefore risk exposing many people to emissions.

The good news is that America can clean up its buses by making them electric. All-electric buses are here, and they’re cleaner, healthier and often cheaper for transit agencies, school districts and bus contractors to run in the long-term.

To clear our air and protect our health, policymakers should accelerate the replacement of diesel and other fossil fuel-powered buses with clean, electric buses.

Dramatic declines in battery costs and improvements in performance, including expanded driving range, have made electric buses a viable alternative to diesel-powered and other fossil fuel buses. 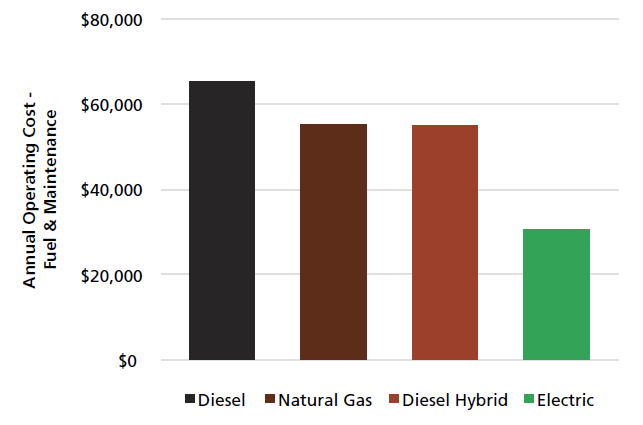 Cities in the United States and around the world are taking the lead, committing to transition to cleaner, quieter and more efficient electric bus fleets.

With reduced operating costs and no tailpipe emissions, all-electric buses and charging stations can be a smart infrastructure investment for school districts and transit providers across the country.

Electrifying buses is also an important first step towards broader adoption of heavy-duty electric vehicles, like trucks. While buses themselves account for a relatively small percentage of vehicle emissions, heavy duty vehicles as a whole are responsible for over a quarter of climate emissions from on-road transportation in the U.S.